According to Hebrew tradition, Adam and Eve are described as wearing “garments of light” while in the Garden of Eden prior to the Fall.[1]  This means that before Adam and Eve fell, their bodies were radiating a tremendous amount of light and glory.

The reasons for this are easy to see.  First, we know that the more obedient one is to the commandments of God, the more of the Light of Christ he or she will receive,[2] and in the pre-existence, Adam was one of the most valiant among us.  In fact, the Doctrine and Covenants teaches us that Adam was called “Michael, the prince, the archangel.”[3] As Michael, Adam led the righteous spirits in the war in heaven against the armies of Lucifer, [4] and “under the direction of Jehovah, he assisted in the creation of the earth.”[5]

Second, we know that during his stay in the Garden of Eden, Adam was an immortal being.  As an immortal being, he was living upon a terrestrial earth which was, at the time, very near in proximity to God’s Celestial Kingdom. According to Brigham Young,

When the earth was framed [created] and brought into existence and man was placed upon it, it was near the throne of our Father in heaven...and when man fell, the earth fell into space and took up its abode it this planetary system, and the sun became our light.[6]

The fact that the earth was so close in proximity to the throne of God before the Fall tells us that it (along with Adam) would have experienced a magnificent amount of light and glory.

Each of these reasons helps us to understand why Adam and Eve have been described as wearing “garments of light” while in the Garden of Eden.

And that wicked one cometh and taketh away light and truth through disobedience (D&C 93:39).

Here we learn that disobedience leads to a loss of light and glory.  One of the consequences of Adam and Eve’s transgression was that they lost the light and glory (garments of light) that they had previously enjoyed during their stay in the Garden of Eden.  After they partook of the fruit, Adam and Eve are described in the scriptures as being “naked,”[7] and rightly so.  In his discourse on the atonement, Jacob tells us exactly what it means to be found “naked” before God.  He says that at the final judgment, if we have not kept the commandments of God, “we shall have a perfect knowledge of all our guilt, and our uncleanness, and our nakedness” (2 Ne. 9:14).  Here, Jacob uses the term “nakedness” to describe guilt and uncleanness.  When we are disobedient to God’s laws, the light of Christ is taken from us and we are left as if we were “naked.”  This is quite literally what happened to Adam and Eve once they transgressed.  They lost the light and glory they previously enjoyed and once this occurred, they realized that they were naked.[8]

Thankfully, the Lord had a means of providing a new covering, which would temporarily replace these “garments of light” that Adam and Eve lost.  We read, “Unto Adam, and also unto his wife, did I, the Lord God, make coats of skins, and clothed them” (Moses 4:27).

As it turns out, this replacement covering is much more symbolic than just representing Adam and Eve’s lost light and glory.  In order to fully understand all the symbolism here involved, we must understand that the Hebrew word for atonement literally means “to cover.”[9]  How appropriate!  Adam and Eve had lost their “garments of light” through transgression, and needed to be atoned for.  In other words, Adam and Eve needed to be “covered” from their nakedness.  This forgiveness (or covering) came when God provided the coat of skins for Adam and Eve.

The Shedding of Innocent Blood 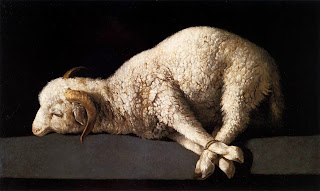 In order to provide this coat of skins, it is likely that one of the animals from the Garden of Eden was killed. This animal, perhaps a lamb,[10] represented our Savior who gave his life so that we could be “covered.”  As it is for us, so it was for Adam and Eve.  By the shedding of innocent blood, Adam and Eve were “covered” and their transgression atoned for.

The Prophet Jacob tells us what is to become of those persons who have been “covered” or “clothed” by Christ’s atonement.  He states that at the final judgment, “the righteous shall have a perfect knowledge of their enjoyment and their righteousness, being clothed with purity, yea, even with the robe of righteousness” (2 Ne. 9:14). Therefore, in contrast to those who are found naked (unclean) at the final judgment, the righteous will be “clothed with purity.”  This is done through the atonement.  It covers our spiritual nakedness and returns to us the light which we have all lost through disobedience.  Such is the symbolism in the story of the Fall.

Satan as a False Messiah

With this new knowledge of the atonement, we are now able to understand what Satan was trying to accomplish in the Garden of Eden.  As we mentioned previously in The Serpents Role in the Fall, Satan’s goal was to get Adam and Eve to worship him as their God.  After Adam and Eve partake of the fruit of the Tree of Knowledge of Good and Evil, Satan is back to his first priority.  He points out to Adam and Eve that they have lost their “garments of light” and tells them that they are naked.  He then attempts to clothe them with fig leaves.  But why?

Based on what we have learned above, it is clear that Satan was trying to “cover” Adam and Eve himself.  In other words, Satan was trying to let Adam and Eve know that he would forgive their transgression, and he would be their Savior; no, not by the shedding of blood, but by offering up “the fruit of the ground,” which was the same strategy he would later use on Cain.[11]  In other words, this strategy of covering of Adam and Eve with fig leaves was just another subtle attempt by Lucifer to get Adam and Eve to worship him, just as he desired in the pre-existence.

Thankfully, the Lord intervenes and foils Satan’s attempt by giving Adam and Eve their true covering—the coats of skins—that He himself provided for them.  The message is clear: it will be God who will provide the atonement for Adam and Eve, not Satan.