The Serpents Role in the Fall 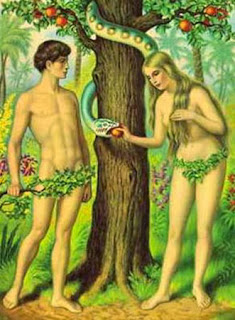 We know that Satan approached both Adam and Eve in the Garden of Eden.  But did he appear to them as himself, in the form of a man, or did he speak to them through a serpent? After all, the scriptures seem to give us mixed signals.  For example, “in the Moses account…Lucifer tricks the serpent into doing his bidding.  However, in 2 Nephi [2:17-18], father Lehi informs us that the serpent is the devil.”[1]

So which one is it?  As we look for answers, we must remember that the story of the Fall is filled with symbolism. While there are some aspects of the fall that can and should be taken literally, there are other aspects of the Fall that are purely figurative and symbolic. For example, Brigham Young informed us that Adam was not literally created from dust, but rather, “he was made as you and I were made and no person was ever made on any other principle.”[2] In other words, the phase “created from dust” is simply a figurative expression.  In the words of BYU’s Cleon Skousen:

The Lord originally told Moses precisely what it meant to be made from the dust of the earth.  This is a technical phrase.  It meant to be “born...by water, and blood, and the spirit which I have made, and so became of dust a living soul” (Moses 6:59).[3]

The Book of Mormon confirms the teaching that Adam was created the same way as the rest of us (birth process); for it was King Benjamin who said, “ye [you and I] were created of the dust of the earth” (Mosiah 2:25). In other words, according to Elder Bruce R. McConkie,

Mortal men are born into mortality, meaning that the spirits from pre-existence come into tabernacles which have been created from the dust of the earth through the normal birth process.[4]

Therefore, if you and I were created from the dust of the earth (i.e. through the birth process), and Adam was also created in the same way, then Adam was born of a woman as well.

This helps us to understand that some aspects in the story of the Fall are not to be interpreted as literal, but rather figurative or symbolic. Such is the case with the serpent.

Let us assume for a moment that Satan did not speak through a serpent in the Garden of Eden, but rather, he personally appeared to Adam and Eve.  This would mean that the term serpent is used only to describe Satan.  If this were true, what exactly are the scriptures trying to tell us about Satan?

Outside the story of the Fall, what does a serpent normally represent?  If asked, most people would probably guess that a serpent would represent evil, perhaps even Satan himself.  The assumption for this logic is understandable, for serpents are deadly creatures, filled with venomous poison and feared by many.  And after all, tradition has it that it was a serpent that Satan used in order to deceive Adam and Eve in the Garden of Eden.  But if we examine the scriptures, we find that the serpent actually represents something different.  In fact, what it represents is the complete opposite of Satan.  It represents God. 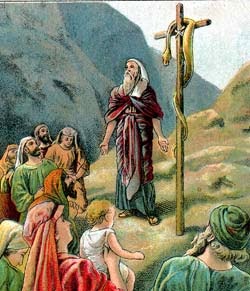 In the book of Numbers, we read that the Lord sent fiery serpents among the camp of Israel.[5]  As a result, many were bitten, and many died.  The Lord, as he often does, gave the children of Israel a chance to repent and be saved.  He had Moses fix a brazen serpent on a pole and invited all who had been bitten to look upon it.  Those who looked would live.  The symbolism of Christ on the cross is easy to see: if we look to Him in our lives we will live.  What is often overlooked in this story is the fact that God used a serpent to represent Christ.

In the book of Exodus we find yet another example of a serpent representing God.  When Moses and Aaron first approached Pharaoh to ask that he let the children of Israel go, Pharaoh refused.  In order to prove that the Lord was on their side, Aaron cast down his rod before Pharaoh and it immediately became a serpent.  Not impressed, Pharaoh brought in his sorcerers and had them cast down their rods, which also became serpents. 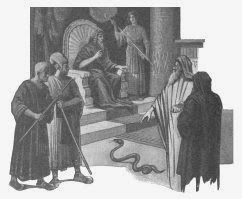 The reason Moses and Aaron turned their rod into a serpent was to tell Pharaoh that God was with them.  Pharaoh had his sorcerers replicate this miracle to suggest that he also had a power on his side.  And he did: Satan.[6]  What we have next is a battle to see whose God is more powerful.  After the sorcerer’s rods become serpents, we read that “Aaron's rod swallowed up their rods” (Exo. 7:12).  The message here is clear: the God of Israel will always triumph over the god of this world.
In addition to these two examples, there is further evidence that suggests that a serpent represented the Messiah.  According to one LDS author,
In most ancient societies, letters and numbers were often used interchangeably, and each letter of an alphabet had a numerical value.[7]
"Generally, the first nine letters of the alphabet stood for numbers one through nine, the next nine for numbers ten through ninety, and so on."[8]  With this formula, each word could therefore be assigned a numerical value.  When two words had the same numerical value, they were considered to represent each other and could be used interchangeably as synonyms.  This is significant because the Hebrew word for Messiah (mashiyakh) and the Hebrew word for serpent (nakhash) both have a numerical value of 358.[9]  This helps to confirm that anciently, and especially in the Hebrew culture, the serpent was a symbol for the Messiah.  As LDS scholar Jeffery Bradshaw stated, "the serpent is a frequently used representation of the Messiah and his life-giving power."[10]
Satan as a Serpent
Why then, would the scriptures use a serpent when describing Satan in the story of the Fall?  Perhaps the best answer to this question comes from the Book of Mormon, where the Prophet Jacob teaches us that Satan, “beguiled our first parents, [by] transform[ing] himself nigh unto an angel of light” (2 Ne. 9:9).  LDS scholar Alonzo Gaskil wrote:

As it turns out, this would not be Satan’s last attempt to get Adam and Eve to worship him.  We see a second attempt in the story of the fig leaves.