Most of us are familiar with the story of the Exodus.  However, what many of us are unaware of is that each of the ten plagues associated with the exodus was a direct attack against one of Egypt’s Gods.  For example, one of the most important Egyptian God’s was Osiris, who was the God of the Nile. It is no surprise therefore, to learn that the first plague preformed by Moses was the turning of the Nile into blood.  This was more than just a statement made by Moses.  Rather, this event signified the death of Osiris, one of Egypt’s most important Gods. 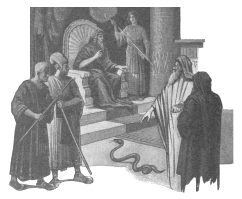 As it turns out, this was not the first time the God of Israel deliberately attacked the Egyptian God’s.  As previously mentioned in The Serpents Role in the Fall, anciently serpents represented deity.[1]  Thus, when Aaron cast his rod down in front of Pharaoh and it turned into a serpent, it symbolized that God was with Moses and Aaron.  Not impressed, Pharaoh had his sorcerers replicate this miracle to suggest that they also had a God on their side.  And they did: Satan.[2]  What occurred next was a battle to see whose God was more powerful.  After the sorcerer's rods became serpents, the scripture states that “Aaron's rod swallowed up their rods” (Exo. 7:12).  The message here is clear: the God of Israel will always triumph over the god of this world.

The War Against Egypt’s Gods

However, still believing that Egypt’s God’s were more powerful than the God of Israel, Pharaoh refused to let the children of Israel go. This battle of God’s was therefore moved from Pharaoh’s court to the battle field of Egypt.  Here is the complete list of Egyptian Gods who were symbolically killed or challenged by the God of Israel during the ten plagues:

Plague 2:  Frogs covered the land.[4]  When dead, these frogs left an awful stench found all throughout Egypt.[5]  Egyptian God killed: Hekt, the Egyptian God always depicted with the head and body of a frog.

Plague 3: Lice.[6]  Egyptian God killed: None that we know of, although having lice would have excluded Egyptian priests from officiating in their temples.[7]

Plague 4: Flies.[8]  Egyptian God killed:  This was a judgment on Hatok, an Egyptian God depicted as a fly.[9]

Plague 6: Boils and blains on the skin of Egyptians.[11]  Egyptian God challenged: Thoth, the Egyptian “god of intelligence and medical learning”[12] was here directly attacked and unable to provide a cure for this terrible skin disease.

Plague 8:  Locusts.[15]  Egyptian God challenged:  Serapia, the very God meant to protect Egypt from locusts, was no where to be found when this plague arrived in Egypt.

Plague 9:  Darkness.[16]  Egyptian God killed: Ra, the God of the Sun was symbolically killed by the God of Israel, as darkness reigned in Egypt.

Plague 10:  The death of Egypt’s firstborn.[17]  Egyptian God challenged:  This plague was a direct challenge against Taweret, the goddess who presides over child-birth, maternity, and the life of all members of the household.[18]  In the end, she was unable to protect the lives of the firstborns in Egypt.


The meaning is clear: the God of Israel will always triumph over the gods of this world.


[1] Brunson, The Serpents Roll inthe Fall
[2]That Satan was the force behind this miracle was alluded to by Elder Jedediah M. Grand who said, "I believe Lucifer has just as much power to make lice now as ever he had, he has just as much ability to display his power in making a serpent to oppose a Moses as ever" (Journal of Discourses, 2:12)
[3] Exodus 7:19