A note from the author: I wrote the below article on the Liahona several years ago, and at the time, the information contained inside reflected my current thoughts about what the Liahona might have been.  However, since posting this article, I came across a study done by Timothy Gervais and John Joyce, entitled "By Small Means: Rethinking the Liahona," published by Interpreter, and located at: https://journal.interpreterfoundation.org/by-small-means-rethinking-the-liahona/  This article by Gervais and Joyce has shifted my opinion on what the Liahona actually was, and I would advise the reader to check out their fascinating study in addition to mine.  When time permits, I will include parts of their study in my article below, but until then I believe their study contains more accurate information on the Liahona then the theories I listed below.  Thank you.  - Rick Brunson
The Liahona
We all know that the Liahona worked “according to the faith and diligence” of Lehi’s party (1 Ne. 16:28). But how did Lehi’s party know if they were being faithful enough to rely upon the direction given by the Liahona?  In other words, because of the nature of the Liahona, its pointers or spindles would have had to point in some direction at all times, even during those times of unrighteousness, so how did you know if it was working or not?  How did Nephi, for example, know that the compass “did cease to work” (1 Ne. 18:12) when they were in the middle of the ocean?  In this setting, it would have been impossible for Nephi to know whether or not the Liahona was pointing in the right or wrong direction.  Furthermore, after Nephi was untied by his brothers, how did he know that the spindles were pointing in the right direction again?

And it came to pass after they had loosed me, behold, I took the compass, and it did work whither I desired it (1Nephi 18:21).

In short, how did Lehi’s party know when to trust the direction given by the Liahona, and when not to?

While we may not have all the answers to this particular question, perhaps we have been given enough information to help us make a good assumption.

The first thing we need to remember is that the Liahona had not one, but two spindles.  Nephi stated:

And within the ball were two spindles; and the one pointed the way whither we should go into the wilderness (1 Ne. 16:10).

If one spindle pointed the way, what was the purpose of the second spindle?  Robert L. Bunker gave us this insight:

“Since a single pointer always “points” in some direction, the additional pointer was necessary to indicate whether or not the first pointer could be relied upon.”[1]

“This is how it would have worked: if an observer viewed the pointers and saw only a single pointer, as seen in figure 1, then they were both aligned in the same direction, one on top of the other, and the director was providing correct information. Lehi’s party could then follow the indicated direction with confidence that it was the Lord’s instruction.  If, on the other hand, the two pointers were cross-ways to each other—forming an “x” as shown in figure 2—then the device was not functioning, and the pointing information was not reliable.”[2] 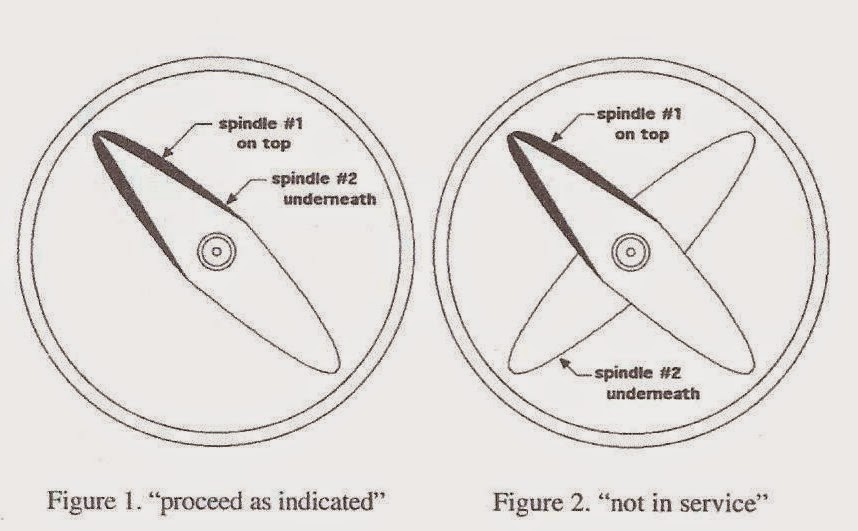 In fact, the Lord has said on several occasions that “in the mouth of two or three witnesses shall every word be established” (D&C 6:28), and it appears that the Liahona was no exception.

One last insight into the Liahona comes to us from Dr. Hugh Nibley. He writes:

“We have in the Book of Mormon a most interesting apparatus called the Liahona. Now the chances of finding a genuine Liahona are, to say the least, remote; but what if something just like it showed up in the hands of Lehi’s relatives? That should certainly come as a surprise, and even provoke some thought. The Liahona has given rise to endless merriment and mockery among critics of the Book of Mormon; only the [sixteen] shining stones of the Jaredites can equal it as a laugh-getter. Even the present writer, for all his curiosity about Book of Mormon oddities, has always passed it by in an abashed silence—it was like nothing he ever heard or read of—until the year 1959. For it was in that year that an Arabic scholar by the name of T. Fahd published the evidence that makes it possible for the first time to say something significant about the Liahona.”[3]

“Belomancy is the practice of [receiving revelation] by shooting, tossing, shaking, or otherwise manipulating rods, darts, pointers, or other sticks, all originally derived from arrows. Over ten years ago the present writer made a fairly exhaustive study of ancient arrow-divination…[including] the ritual use of sticks and rods, especially in ancient Israel. Yet it was not until he saw Fahd’s study, the first full-length treatment of old Semitic arrow-divination, that it dawned upon him that these old practices might have some connection with the Liahona. For the most common use of divination arrows, and probably their original purpose, was, according to the forgotten evidence unearthed by the diligent Fahd, the direction of travelers in the desert.”[5]

More about this connection with the Liahona in a moment, but first, a short description of these religious arrows according to Nibley:

“Fahd begins by pointing out that the “arrows” used in divination, were devoid of heads and feathers, being mere shafts or pointers…. But why arrows? Because, as we have shown elsewhere, the shooting of arrows is a universal form of [receiving revelation]…for instance, the arrow-prayers of the Indian and Beduin…[were used] to entrust their lives and their fate to a power beyond their control. The consultation of the arrows by one about to marry was also an old Jewish custom; the parties concerned would throw rods into the air, [and would interpret] their message by the manner of their fall….[6] Other substitutes for shooting [arrows] were shaking or drawing [them] from a bag or quiver.” [7]
The interesting aspect about the Liahona however, was that it not only used arrows for receiving revelation, but there were messages from the Lord written upon these very pointers from time to time. The Book of Mormon states:

And it came to pass that I, Nephi, beheld the pointers which were in the ball…And there was also written upon them [i.e., the pointers] a new writing, which was plain to be read, which did give us understanding concerning the ways of the Lord; and it was written and changed from time to time, according to the faith and diligence which we gave unto it (1 Ne. 16:28-29).

As it turns out, several of these ancient people would also write religious messages on the very arrows that they were using to receive revelation with. According to Nibley:

“Whenever divination arrows are described [anciently], they are invariably found to have writing on them… It is certain that men from the earliest times have sought guidance by consulting the pointings and the inscriptions [on the] headless and tailless arrows.”[8]

Nibley then proceeds to give a few examples of this practice:

“[There] were arrows upon which the Arabs…wrote ‘Command’ and ‘Prohibition’; or upon some of which was written ‘my Lord hath commanded me’; and upon some, ‘My Lord hath forbidden me’…. The zalam [were arrows that] belonged to Kureysh…upon which were written ‘He hath commanded,’ and ‘He hath forbidden,’ and ‘Do thou’ and ‘Do thou not’…[and these arrows were] placed in [the holy shrine of Meccah]…and when a man desired to go on a journey, or to marry, he came to the minister, and said, ‘Take thou forth for me a [arrow]; and thereupon he would take it forth and look at it [in order to receive the message from God].’”[9]

In addition, the Liahona, as we all know, was used mainly by Lehi’s party to receive revelation specifically for travel purposes, and as Nibley has already suggested, these ancient people often used these arrows in receiving inspiration and direction regarding their travels as well. Nibley writes:

“The inscriptions on the arrows themselves give top priority to travel: typical examples from the various systems are “Go slow!” “Speed Up!” “Water!” “Stay where you are!” “Get moving!” “You are in the clear,” etc.”[10]

Nibley then concludes as follows:

“It would be an obtuse reader indeed who needed one to spell out for him the resemblance between ancient arrow-divination and the Liahona: two “spindles or pointers” bearing written instructions provide superhuman guidance for travelers in the desert. What more could you want? But what is the relationship between them? On this the Book of Mormon is remarkably specific. Both Nephi and Alma go out of their way to insist that the Liahona did not work itself, i.e., was not a magic thing, but worked only by the power of God and only for appointed persons who had faith in that power.”[11]

“Was the Liahona, then, just old magic? No, it is precisely here that Nephi and Alma are most emphatic—unlike magic things, these pointers worked solely by the power of God, and then, too, for only those designated to use them.…

“Where, then, does one draw the line between the sacred and the profane? Religion becomes magic when the power by which things operate is transferred from God to the things themselves. As Fahd notes, the Arabs were extremely vague about the powers with which they dealt, as “primitive” people are everywhere. When men lack revelation they commonly come to think of power as residing in things. Did the staff of Moses make water come from the rock or cause the Red Sea to part? Of course not; yet in time the miraculous powers which were displayed through its agency came to be attributed by men to the staff itself.[12]

In the words of LDS scholar Michael Ash, Hugh Nibley and T. Fahd “deserve our thanks for having called attention to this interesting and forgotten gadget in 1958; but how could Joseph Smith know about it in 1829?”[13]