The Tower of Babel


Did the builders of the Tower of Babel really believe that they could literally get to heaven by building a tower? Or is it possible that we may have misunderstood this famous Bible story? Try and follow my logic here. If you or I were to gaze into the heavens, day or night, all we would be able to see is never ending space. The last thing I would believe (even if I lived back then) is that mankind could actually build a structure high enough as to penetrate heaven itself. After all, there is not enough dirt on earth to accomplish this task from our perspective here on earth looking upward. There has to be another meaning to this story, right? 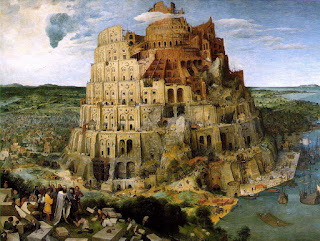 The first thing we should point out is that the builders of Babel may have wanted a high tower in their land for a completely different reason than what we have traditionally come to believe. Genesis reads:

And they said, Go to, let us build us a city and a tower, whose top may reach unto heaven (Genesis 11:4).

Notice that this scripture does not say that the inhabitants of Babylon desired to build a tower that would get them to heaven. Rather, it states that they wanted a tower “whose top may reach unto heaven.” Is it possible that the term heaven in this context simply means sky, or atmosphere? If so, all that this scripture tells us is that these people wanted to build an extremely high tower. What it does not tell us is why these people wanted a high tower in the first place.

If their motive in building a high tower was not to get to heaven, what was it? To understand their actions, we need to understand that this event actually took place only a hundred years or so after the flood; and according to the ancient Jewish historian Josephus:

“Nimrod [the founder of Babylon]…said he would be revenged on God if God should have a mind to drown the world again; for that, he [Nimrod] would build a tower too high for the waters to be able to reach!”[1]

In other words, Nimrod and his people built this Tower of Babel to challenge God in the event of another flood. And rather than repenting and living in a way so as not to bring God’s wrath upon them, Nimrod and his people preferred to defy God and simply build a high tower instead. Josephus stated that the inhabitants of this city “esteemed it a piece of cowardice to submit to God; and they built a tower [instead]… It was built of burnt brick, cemented together with mortar, made of bitumen, that it might not be liable to admit water [in the event of another flood].”[2]

The Book of Mormon

Of course, the Book of Mormon seems to support the idea that the builders of Babel wanted a tower for the sole purpose of getting into heaven. For example, the prophet Mormon stated that their motive was to “build a tower sufficiently high that they might get to heaven” (Helaman 6:28).[3] While the sky or atmosphere interpretation could certainly be used in this context as well, it is likely that another meaning is implied.

Latter-day Saints often refer to the temple as heaven on earth. With this in mind, is it possible that the builders of Babel wanted a tower that would allow them to reach heaven symbolically rather than literally? In other words, was the Tower of Babel built to serve more as a temple than tower? After all, the word Babel actually means “gate of God,”[4] which is the very purpose of the temple. For example, Elder Franklin D. Richards said that “the temple…when acceptably dedicated, becomes to us the gate of heaven.”[5]

As it turns out, this interpretation is gaining more and more traction among Latter-day Saints. For example, LDS scholar Jeffery Bradshaw said, “The key is to realize that the tower was not built so that people could ascend to heaven, but so that deity could descend to earth.”[6] Bradshaw also gives us some insight as to what type of structure the Tower of Babel was:

“The Tower of Babel described in the Bible was almost certainly a Mesopotamian ziggurat.”[7]

What is a Ziggurat? “Ancient ziggurats,” writes historian Jessica Miller, “were massive temple structures built in Ancient Mesopotamia…. Unlike pyramids, these structures would have contained stairs to allow designated people access to upper levels.”[8] In addition, ziggurats often had a temple complex at the top of their structure, which was considered the dwelling place of deity. The following model, displayed in the Pergamum Museum in Berlin, shows us what the ziggurat and its temple complex might have looked like.

Is it possible that the Tower of Babel was nothing more than a ziggurat, or false temple? After all, “Lucifer,” according to Elder Bruce R. McConkie, “is the Great Imitator [who] patterns his kingdom after that of the Lord.”[9] And this tower may have been no exception. According to LDS scholar Catherine Thomas:

“The tower of Babel was a counterfeit gate of God, or temple, that Ham’s priesthood-deprived descendants built in rebellion against God.”[10]

In fact, this counterfeit religion may have extended much farther than just a false temple. Indeed, it is likely that Satan was attempting to set up a counterfeit Zion. According to the LDS Old Testament Student Manual:

“Thus, in the same patriarchal age, Melchizedek established a Zion after the pattern of Enoch…and Nimrod established a Babylon that gave its name to the prototype of the kingdom of Satan, the antithesis of Zion.”[11]

While this false temple may have been the main reason why God destroyed the tower of Babel, it is likely that the confounding of languages, which came shortly after this towers destruction, was done by God for a completely different reason. According to Josephus, God confounded the language at this time because the inhabitants of Babylon were in direct violation of one of his previous commandments:

“[After the flood] God commanded [Noah son’s and their descendants] to send colonies abroad for the thorough peopling of the earth, that they might not raise seditions among themselves, but might cultivate a great part of the earth, and enjoy its fruits after a plentiful manner. But they were so ill instructed that they did not obey God.… God admonished them again to send out colonies; but they, imagining the prosperity they enjoyed was not derived from the favor of God, but supposing that their own power was the proper cause of the plentiful condition they were in, did not obey him.[12]

Here we learn that God had previously commanded Noah’s descendants “to send colonies abroad.” In other words, they were to spread out and inhabit the entire earth. Instead, they chose to remain together and built one large city. More often than not, these large cities are the cause of great wickedness, and this ancient city of Babylon was no exception. Furthermore, by remaining together, they could not “cultivate a great part of the earth, and enjoy its fruits after a plentiful manner,” as Josephus stated.

Because God knew how important it would be for the future of mankind to inhabit the entire earth, God gave this civilization no choice. He confounded the Adamic language that was common to everyone,[13] which forced individuals to spread out and gather together with those whom they could understand. The Lord said in Genesis:

Go to, let us go down, and there confound their language, that they may not understand one another’s speech. So the Lord scattered them abroad from thence upon the face of all the earth (Genesis 11:7; emphasis added).

This insight is also confirmed by the Book of Mormon:

In other words, the Lord wanted them to spread out over the whole earth, and since they did not obey voluntarily, the Lord confounded their language, which naturally caused them to be scattered into colonies that could understand each other. Had they obeyed God’s command the first time, it is likely that they could have kept their common language intact. After all, the Brother of Jared and his family willingly obeyed this commandment and the Lord kept their language pure.