The 70 Weeks of Daniel

The Jews were told the exact day there Messiah would come nearly 600 years in advance.[1]

In 605 B.C., the Babylonians besieged Jerusalem. After this siege, Nebuchadnezzar, the King of Babylon, brought back from Jerusalem a handful of Israelites who were “skilful in all wisdom, and cunning in knowledge, and understanding science,” and this that the Babylonians might teach them “the learning and the tongue of the [Babylonians]” (Dan. 1:3-4).  Among these Israelites taken captive to Babylon were “Daniel…Shadrach…Meshach…[and] Abed-nego” (Dan. 1:6-7).

About 8 years later, in 587 B.C., the Babylonians again laid siege
on Jerusalem. This time, however, they burned the temple, destroyed the city, and carried the remainder of Israelites captive into Babylon.  There, the Jews remained in bondage for 70 years.[2]  This captivity was prophesied by the prophet Jeremiah, who said,

And this whole land [of Jerusalem] shall be a desolation…and these nations shall serve the king of Babylon seventy years (Jer. 25:11-12).

This commandment was to be observed the entire time that the Israelites occupied the promised land of Palestine.[3] However, for 490 years—the entire length of time the children of Israel occupied this land—they failed to obey this commandment.  Therefore, the Lord said that they had to repay the land 70 years worth of sabbaths.  The Israelites, therefore, remained in captivity for seventy years (from 605 B.C. to 537 B.C.[4]) “until the land had enjoyed her Sabbaths” (2 Chron. 36:22).

Near the end of this captivity, Daniel, who was in Babylon at the time, was studying the writings of Jeremiah. He discovered that Jeremiah prophesied that their captivity in Babylon would only last seventy years. This would mean, as Daniel realized, that the Israelite captivity would come to an end in the very near future.  In Daniels own account, he states,

I Daniel understood by books the number of the years, whereof the word of the LORD came to Jeremiah the prophet, that he would accomplish seventy years in the desolations of Jerusalem (Dan. 9:2).

Having read Jeremiah’s prophecy, and knowing that the 70 years
was almost up, Daniel “prayed unto the LORD” (Dan. 9:4).  In the middle of his prayer, a heavenly messenger, who revealed himself as Gabriel, interrupted him.[5]  As it turned out, Gabriel came to Daniel with a very specific and impressive prediction. Gabriel revealed to Daniel the exact day that Jesus would present himself as the Messiah to the Jews at Jerusalem!  Gabriel revealed:

Know therefore and understand, that from the going forth of the commandment to restore and to build Jerusalem unto the Messiah the Prince shall be seven weeks, and threescore and two weeks (Dan. 9:25; emphasis added).

At first glance this scripture may be hard to translate into terms that you and I can understand. But if we break this scripture down phrase by phrase, and study out what Gabriel is actually telling Daniel, we will come to understand one of the most impressive predictions in the entire Old Testament.

Gabriel said that “from” a future commandment (given by a later king) to rebuild the city of Jerusalem, “unto” the time of the Messiah, “shall be” 69 weeks.[6] But before we go any further into our study, it will be helpful to know what is meant by the term “week” as it appears in this context.

When you and I think of a week, we think of a 7-day period.  However, in ancient Israel the term week could have meant seven days, seven weeks, seven months, or seven years depending on the context being used.[7]  This is because the Hebrew word for weeks (shavuiem) can be translated as “sevens,” or “periods of seven.”

When used in the context of the Book of Daniel, this term week has reference to a week of years (or 7 years).  So when Gabriel says that the Messiah will come in 69 weeks, what he is really saying is that the Messiah will come in “69 periods of 7 years each.”  If multiplied out, 69 x 7 = 483 years. This is how long Gabriel says it will be from the future commandment (given by a later king) to rebuild the city of Jerusalem, unto the time of the Messiah.

As mentioned previously, in 537 B.C the Babylonians destroyed Jerusalem and burned the temple. As a result, Jerusalem remained in ruins for many years. After their captivity, the Jews returned to Jerusalem and Artaxerxes, the King of Persia, granted them permission to rebuild the city and its surrounding wall.[8]

According to multiple historians, and many other historical records, we know that this event occurred in 445 B.C.[9]  Thanks to the Old Testament, we even know the exact day that this command was issued.  Nehemiah 2:1 states that King Artaxerxes issued this command on Nisan 1st (which is the first month on the Jewish calendar).  Nisan 1st when translated into our calendar is equivalent to the date March 14th.  With this information, we can conclude the date of this command was March 14th 445 B.C.  This was the day Gabriel had reference to when he said, “from the going forth of the commandment to restore and to build Jerusalem…” (Dan. 9:25).

We also know the ending date that Gabriel spoke of when he said, “unto the Messiah the Prince” (Dan. 9:25).  This phrase, “Messiah the Prince,” has reference to both a religious leader (Messiah), and a political leader (Prince). The Hebrew word for Prince (Nagid) implies king.  Therefore, in effect, Gabriel was telling Daniel that the true Jewish Messiah would present himself as a political leader (or king) on a certain day 483 years from the command given by Artaxerxes to rebuild Jerusalem.

We therefore ask, was there ever a time when Jesus permitted himself to be adorned as a king?  We know that there were many times that his followers wanted to make him a king, but each time they attempted to do so Jesus slipped away from them and foiled their plans.  A good example of this is in the Gospel of John:

When Jesus therefore perceived that they would come and take him by force, to make him a king, he departed again into a mountain himself alone (John 6:15).

As New Testament scholar Chuck Missler points out, “then one day, Jesus does something [out of the ordinary].  He not only permits it, he arranges it!  He deliberately sets things up to fulfill a prophesy of Zechariah”[10] which states:

Rejoice greatly…Jerusalem: behold, thy King cometh unto thee: he is just, and having salvation; lowly, and riding upon an ass, and upon a colt the foal of an ass (Zech. 9:9; emphasis added).

It was during his triumphal entry to Jerusalem that Jesus presented
himself as a king to the Jews, or as Gabriel put it, as “Messiah the Prince” (Dan. 9:25).  According to Luke,

And when [Jesus] was come nigh, even now at the descent of the mount of Olives, the whole multitude of the disciples began to rejoice and praise God…Saying, Blessed be the King that cometh in the name of the Lord (Luke 19:37-38; emphasis added).

Everything about this event indicates that Jesus was here presenting himself as a king to the Jews. The animal he rode on was meant for a king; people in the streets laid down palm branches and “spread their garments” before Jesus,[11] something that was only done for kings. According to Elder Bruce R. McConkie,

Only kings and conquerors received such an extraordinary token of respect. In every part of this triumphal entry to Jerusalem, Jesus seems not only to permit but to court the adulation and homage normally reserved for kings and great rulers.[12]

This was why the Pharisees were so outraged to see Jesus during his triumphal entry:

And some of the Pharisees from among the multitude said unto [Jesus], Master, rebuke thy disciples.  And [Jesus] answered and said unto them, I tell you that, if [my followers] should old their peace, the stones would immediately cry out (Luke 19:39-40).

Because Jesus was essentially presenting himself as the king of the Jews, the Pharisees were naturally outraged. No doubt, this triumphal entry was the day that Gabriel had reference to in Daniel 9.

from the going forth of the commandment to restore and to build Jerusalem unto the Messiah the Prince shall be [69 weeks, or 483 years] (Dan. 9:25; emphasis added).

Or in other words, from Artaxerxes command (March 14th 445 B.C.), unto the triumphal entry (April 6th, 32 A.D.) shall be 483 years. If you were to multiply 483 years, with the Jewish calendar of 360 days per year,[15] you could say that Gabriel was telling Daniel that the Messiah would come in 173, 880 days from the command given by Artaxerxes to rebuild Jerusalem!!  As it worked out, this is the exact number of days that Jesus’ triumphal entry into Jerusalem was removed from Artaxerxes command.

It is interesting to see what Jesus expected of his people in return for allowing Gabriel to reveal the exact day their Messiah would come. Returning to the account in Luke 19, after Jesus is hailed as a king during his triumphal entry, he nears the city of Jerusalem and begins to weep.[16]  He then says something extremely profound.  Jesus begins by criticizing the Jews, his own people, for not recognizing him as their Messiah, even when Gabriel revealed the exact day that he would come.  He said,

If thou hadst known, even thou, at least in this thy day, the things which belong unto thy peace! but now they are hid from thine eyes. For the days shall come upon thee, that thine enemies shall cast a trench about thee, and compass thee round, and keep thee in on every side, And shall lay thee even with the ground, and thy children within thee; and they shall not leave in thee one stone upon another; because thou knewest not the time of thy visitation (Luke 19:42-44; emphasis added).

Jesus held them responsible for knowing and understanding their
scriptures; and because they did not, he told them that Jerusalem would be destroyed as a result. This was fulfilled in A.D. 70 when the Romans, under Titus, laid siege on Jerusalem and destroyed the city, killing over one million Jews.

Interestingly enough, Gabriel also told Daniel what would happen immediately after Jesus presented himself as a king to the Jews. Gabriel said that after this triumphal entry, “shall [the] Messiah be cut off, but not for himself” (Dan. 9:26).

Here we have a prophecy that the Messiah will be executed, and it is right there in the Jewish Old Testament! It also says that this Messiah will not be cut off for himself, meaning he will be slain for us.

Gabriel then revealed that after this Messiah is slain, “the prince…shall come [and] destroy the city and the sanctuary” (Dan. 9:26). Jerusalem and its sanctuary (the Temple of Solomon), was destroyed in A.D. 70 after Jesus was crucified. These scriptures are very specific: the true Jewish Messiah will presented himself as a king to the Jews 483 years from a certain point in time. He will then be slain on the behalf of others but before the fall of Jerusalem in A.D. 70. As far as I can tell, there is only one person in history who fits each of these requirements: Jesus of Nazareth. 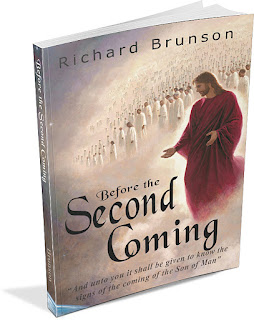 It is for this reason that I have written my new book entitled, Before the Second Coming.  Read about it here.


[1] This author is indebted to a speech given by Dr. Chuck Missler entitled “The 70Weeks of Daniel,” for many of the insights contained within this article.  To order the DVD of this speech, please click on the following image: